For gay men who are interested in educating themselves about the skillful use of BDSM play in their sex lives, one of the best resources in New York City is Gil Kessler, who for 25 years has conducted an annual class for novices – men drawn to kinky play who have little or no experience, or players with some experience who want a refresher course. Kessler is currently enrolling students for the next class, which begins January 5 and runs through March 16.  The class consists of six four-hour sessions (every other Sunday from 3-7 pm), which he conducts at his residence in the West Village. It’s open to men who are at least 19 years old and comfortable working with other men, sometimes undressed. Everyone participates as both top and bottom in the demonstrations and workshop exercises. Among the topics covered are basic bondage, spanking and flogging, tit and genitorture, rope harnesses, things that pinch, mummification, and electricity. The cost of the class is extremely modest — $40, which covers all supplies, notes, and refreshments for the course. For more information, or to apply, contact Gil at novices2014@yahoo.com and include your name and phone number.

His teaching evolved out of his membership in the Gay Men’s S&M Association (GMSMA), which met twice each month at the Gay and Lesbian Center on West 13th Street from the early 1980s until 2009, when the group disbanded. GMSMA defined itself not as a private sex club but more of an organization focused on social networking, activism, and education. From the beginning, it offered one-time workshops on specific topics (flogging, fire play, wax) and multi-session special interest groups (SIGs) that addressed larger issues (fantasies, foot fetishes, S/M literature, spirituality). An avid member, Kessler served a term as president of GMSMA and became resident archivist for the group, keeping copious notes on its workshops and activities, which eventually included a SIG for novices. (The GMSMA archives are housed at the Leather Archives and Museum in Chicago.)

“I’ve been conducting a Novices SIG since 1990,” Kessler told me. “It was originally for tops only. We soon offered one for bottoms only, conducted by experienced bottoms. But after a while there was no one to reliably conduct the Bottoms SIG so I combined them. That worked wonderfully, with everyone being both top and bottom. There were times when I conducted more than one SIG during the year, and they used to include as many as 16 sessions.  As time went on, I continually condensed, finally getting down to six sessions covering the major topics.” When GMSMA shut its doors in late 2009, Kessler continued offering the class under the auspices of The Eulenspiegel Society (TES). 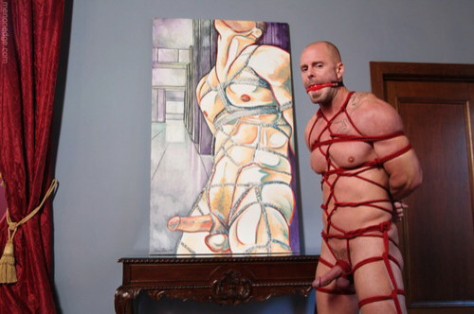 “It’s hard to judge what was in my own personality and what I picked up from other people,” Kessler said. “I certainly learned to be patient and listen to my bottoms (I was never really a bottom myself), and to try to make them happy as my major goal. How much of that came from me or from other people? I don’t know. I seemed to simply learn as I went along and as I began teaching others what I knew.”

For me, Kessler exemplifies what a community elder looks like – someone who has accumulated a wealth of knowledge and experience and has found a way to transmit this information to younger men with generosity and grace. In his retirement, of course, he enjoys spending more and more time at his country home in upstate New York, and he’s not going to be teaching Novices SIGs forever. So if you’re inclined to avail yourself of this valuable resource, don’t wait.

The front page of the Sunday New York Times business section yesterday led with an important story called “Selling That New-Man Feeling.” The article details how the pharmaceutical industry, especially the company that manufactures Androgel, has made literally billions of dollars exploiting adult men’s insecurities about aging, masculinity, and sexual performance. Although many scientists find the claims made by companies promoting testosterone supplements to be unpersuasive, still the market plays to guys who get suckered into thinking “low-T” is a major health problem and that boosting their testosterone levels with commercial products will lead to the fountain of youth or at least better boners.

I do believe there are some men whose health is affected adversely by sub-normal testosterone levels. But that population is quite small, not big enough to enrich pharmaceutical companies. The way testosterone supplements are being marketed now, with vague questionnaires that link “low-T” to symptoms every breathing human experiences, constitutes the worst kind of snake-oil salesmanship. I have friends who’ve gotten suckered into trying testosterone patches, gels, and injections. Some of them have experienced the illusory effect of feeling stronger, peppier, and more libidinous — to my mind, indistinguishable from the placebo effect — but most of them have encountered significant side effects: irritability and short-temperedness at best, prostate cancer at worst. 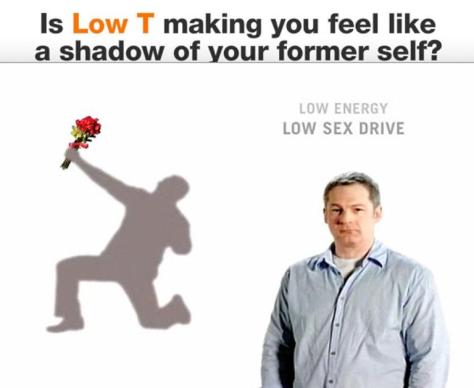 Granted, any doctor who’s any good monitors prostate health closely when prescribing such supplements, but not every patient collaborates with their physicians’ best practices. But in my work as a sex therapist, I have been appalled to hear that men in their sixties and seventies have been prescribed testosterone supplements by their doctors. It seems to me unconscionable to mislead middle-aged and elderly men into thinking they can maintain the same level of sexual performance they experienced when they were 25. Men can lead active, healthy, sexually fulfilling lives well into later life, but the key factors are diet, exercise, stress reduction, and emotional balance, not to mention a concerted effort to accept aging with grace and resourcefulness — all of which require patience and commitment, for which pills and gels are no substitute.

But don’t take my opinions and observations as the last word. Judge for yourself. Read the article here and tell me what you think. Another very smart article on this subject appeared in the Times two years ago, talking about how the use of steroids and hormone supplements by athletes has spread to the general population — see Steve Kettman’s “Are We Not Man Enough?”

My friend George Russell, an extraordinarily skilled chiropractor, bodyworker, and former dancer, recently wrote a blog post that I thought was so smart and thoughtful that I’d like to share it:

A good way to start that cultural revolution you’ve had on your bucket list ever since you bought the White Album, try starting with the body, your own and others’.

I taught “Alignment for Actors” for several years at NYU’s Atlantic Theater Company conservatory.  On the first day, I would have 16 freshman actors in front of me, 2/3 girls, 1/3 boys, dressed for movement.  The vast majority of the girls were dressed carefully, and moved in a way that was neat, self-aware, and used a small amount of personal space, like they were dancing in an airplane aisle.  An equal proportion of the boys could hardly tell what their bodies were doing, how they were shaped, or even what they were wearing, but they ate up space, spoke more than the girls, and moved boisterously and in front, like they themselves were the airplanes.  The girls were focused on how they were being seen.  The boys were focused on what they could do.  I found myself intrigued and concerned about how that would play out in their lives.  And I tried my best to make it a problem and project for them.

Now I turn my attention to you.  Let’s start with a couple of experiments.  First,

What you tell yourself about your body may not surprise you (after all, you’ve been hearing it all your life), but it may surprise you (especially if you’re a man) to know how much what you think of yourself in private is culturally determined.  Are we having fun yet?  Great.  Then get dressed and come with me.

Go to a public place.  Observe a group of men and women you don’t know who are having a conversation.  See who takes more space, and who takes less.  See who is careful to smile and retreat in their shoulders or chest, and who pushes their body forward, dominating the conversation and the space with gesture and words.  See who ends statements with an inflection that sounds like a question.  When two people speak simultaneously, see who apologizes and yields the floor.  If a woman is interrupting, and/or speaking more than others, what do you think of her?  What are the habits and characteristics of the people you attracted to in the group?  Whom do you consider successful or likeable?

If any of these ideas sound right to you, keep your eye on them.  Track what you think, and it will change.

If these ideas don’t sound right to you, you’re probably not especially gender-normative.  This is neither good nor bad, but you might ask yourself how you got that way and how you feel about it.

You might think I’m saying that the way we hold our bodies, how we regard ourselves physically, and how bodies interact in public situations is political. But what I’m saying is actually far MORE radical than that. What our bodies are to us, and what our bodies do IS our politics.  The body enacts what we really believe about ourselves in relation to others, and those beliefs are different, and often opposite, to our “political beliefs.”

YIKES.  Let me know what you discover.

You can find out more about George and his work on his website here.