For gay men who are interested in educating themselves about the skillful use of BDSM play in their sex lives, one of the best resources in New York City is Gil Kessler, who for 25 years has conducted an annual class for novices – men drawn to kinky play who have little or no experience, or players with some experience who want a refresher course. Kessler is currently enrolling students for the next class, which begins January 5 and runs through March 16.  The class consists of six four-hour sessions (every other Sunday from 3-7 pm), which he conducts at his residence in the West Village. It’s open to men who are at least 19 years old and comfortable working with other men, sometimes undressed. Everyone participates as both top and bottom in the demonstrations and workshop exercises. Among the topics covered are basic bondage, spanking and flogging, tit and genitorture, rope harnesses, things that pinch, mummification, and electricity. The cost of the class is extremely modest — $40, which covers all supplies, notes, and refreshments for the course. For more information, or to apply, contact Gil at novices2014@yahoo.com and include your name and phone number.

His teaching evolved out of his membership in the Gay Men’s S&M Association (GMSMA), which met twice each month at the Gay and Lesbian Center on West 13th Street from the early 1980s until 2009, when the group disbanded. GMSMA defined itself not as a private sex club but more of an organization focused on social networking, activism, and education. From the beginning, it offered one-time workshops on specific topics (flogging, fire play, wax) and multi-session special interest groups (SIGs) that addressed larger issues (fantasies, foot fetishes, S/M literature, spirituality). An avid member, Kessler served a term as president of GMSMA and became resident archivist for the group, keeping copious notes on its workshops and activities, which eventually included a SIG for novices. (The GMSMA archives are housed at the Leather Archives and Museum in Chicago.)

“I’ve been conducting a Novices SIG since 1990,” Kessler told me. “It was originally for tops only. We soon offered one for bottoms only, conducted by experienced bottoms. But after a while there was no one to reliably conduct the Bottoms SIG so I combined them. That worked wonderfully, with everyone being both top and bottom. There were times when I conducted more than one SIG during the year, and they used to include as many as 16 sessions.  As time went on, I continually condensed, finally getting down to six sessions covering the major topics.” When GMSMA shut its doors in late 2009, Kessler continued offering the class under the auspices of The Eulenspiegel Society (TES).

“It’s hard to judge what was in my own personality and what I picked up from other people,” Kessler said. “I certainly learned to be patient and listen to my bottoms (I was never really a bottom myself), and to try to make them happy as my major goal. How much of that came from me or from other people? I don’t know. I seemed to simply learn as I went along and as I began teaching others what I knew.”

For me, Kessler exemplifies what a community elder looks like – someone who has accumulated a wealth of knowledge and experience and has found a way to transmit this information to younger men with generosity and grace. In his retirement, of course, he enjoys spending more and more time at his country home in upstate New York, and he’s not going to be teaching Novices SIGs forever. So if you’re inclined to avail yourself of this valuable resource, don’t wait.

Need I say that this is not a film for the faint of heart? 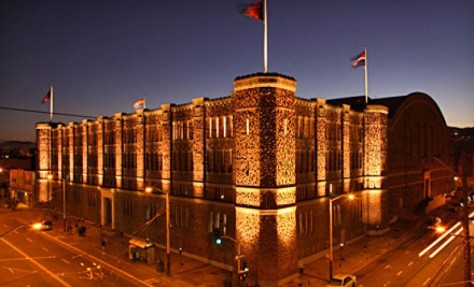 The Kink site I’m most familiar with is Bound Gods, whose creator, Van Darkholme, is a major figure in the documentary, representing the gay male fetish fiefdom within Kink.com. Although I’ve been curious to check out the bondage and fetish sites he produces, I’ve always been put off by his personality and his manner. He’s extremely brusque and lacking in the qualities of caring that I would want in a kinky top. And he doesn’t come off any differently in the documentary. Considering how coldly he treats his performers, especially the way he berates and corrects the tops in scenes he’s filming, it’s hard for me to understand how he gets so many guys to do the things they do for him.

And it’s not just that the women are nurturing and the men are brutal — we get to watch a male top conducting a very intense scene with a woman who’s bound, suspended, and being worked over by an ingenious vibrating machine, and he exhibits a beautiful mixture of authority and attunement. Another male producer makes it very clear that he doesn’t like to have anyone on the set who isn’t really really into what’s going on.

This is not a film that’s going to be a hit in theaters or get an Academy Award nomination. It will most likely find its following on DVD. But I hope a lot of people will watch it. Just as the feature film The Sessions gave moviegoers an avenue to understand the world of sexual surrogacy, Kink succeeds in its intention to avoid sleazy sensationalism and to enlighten curious viewers.