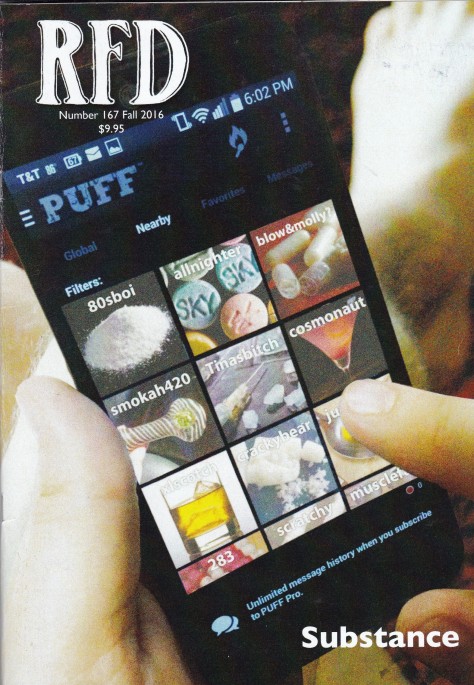 Last fall RFD, the radical faerie quarterly reader-written journal, devoted a special issue to the topic of Substances. The magazine includes some extremely honest and searching writings looking at many different practices involving party drugs and sacred medicines. I continue to marvel and chuckle at the powerful, witty cover image created by managing editor Bambi Gauthier and art director Matt Bucy (above). I contributed a very personal essay about my own experience of using various mind-altering substances, what I’ve gained, and how closely I monitor the balance of recreational and ceremonial explorations, what’s excessive and what’s enough. The essay is titled “Pleasure, Anesthesia, and the Burden of Consciousness: Notes on Substances.”

I am at heart an epicurean. I believe that pleasure is the greatest good in life, and in my sacred intimate practice I’m a champion of healing through pleasure. I’m quite attached to the pleasures in my life: the four cups of strong black tea that fuel my day, the couple of glasses of wine or beer that are my treat at the end of the day, my robust sex life, my enjoyment of music, and the occasional toke that my stoner boyfriend has taught me to enjoy. At the same time, I’m aware that sometimes it’s hard to distinguish pleasure from anesthesia, and sometimes I wonder what pain or fear I might be medicating or numbing with the substances I routinely enjoy. I’m sure I’m a bit hypervigilant about this because my father’s alcoholism left a strong imprint on my life. But I like to believe that I remain in choice rather than compulsive about my pleasures, and I’ve noticed that when I diet to prepare for sacred medicine ceremonies, I get quite cranky about giving up tea and wine and still spend considerable energy thinking about and craving them. There are writing projects that are important to me that I’m trying to summon the energy and stamina and concentration to complete, and it’s unclear to me whether my use of substances helps or hinders that. The constant existential battle between Living a Good Life and Getting Things Done.

RFD has a fairly small readership, so after sharing the essay with a handful of friends, one of them suggested I approach Reality Sandwich, the online magazine created by Evolver Learning Lab, about republishing my piece. The editors there enthusiastically embraced the idea, so now it’s available to read in full. Check it out here and let me know what you think. 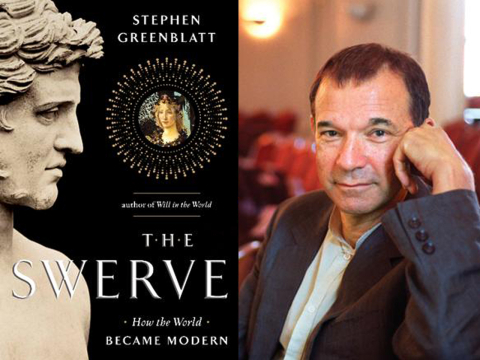 In his Pulitzer Prize-winning book The Swerve, Stephen Greenblatt offers a detailed summary of Lucretius’s provocative, far-reaching, influential epic poem from the first century B.C., De rerum natura (On the Nature of Things), which is itself a digest for Roman audiences of the teachings of Epicurus, the ancient Greek philosopher. Epicurus certainly looms large in my own personal pantheon — his philosophy proclaims that the highest good in life is pleasure. Here’s a passage from The Swerve that speaks to the concerns of this blog…

The greatest obstacle to pleasure is not pain; it is delusion. The principal enemies of human happiness are inordinate desire –the fantasy of attaining something that exceeds what the finite mortal world allows – and gnawing fear. Even the dread plague, in Lucretius- account – and his work ends with a graphic account of a catastrophic plague epidemic in Athens – is most horrible not only for the suffering and death that it brings but also and still more for the “perturbation and panic” that it triggers.

It is perfectly reasonable to seek to avoid pain such avoidance is one of the pillars of his whole ethical system. But how is it possible to keep this natural aversion from turning into panic, panic that only leads to the triumph of suffering? And, more generally, why are humans so unhappy? 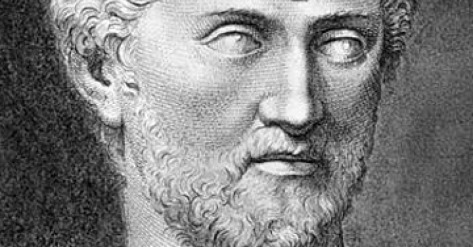 The answer, Lucretius (above) thought, had to do with the power of the imagination. Though they are finite and mortal, humans are gripped by illusions of the infinite – infinite pleasure and infinite pain. The fantasy of infinite pain helps to account for their proneness to religion: in the misguided belief that their souls are immortal and hence potentially subject to an eternity of suffering, humans imagine that they can somehow negotiate with the gods for a better outcome, an eternity of pleasure in paradise. The fantasy of infinite pleasure helps to account for their proneness to romantic love: in the misguided belief that their happiness depends upon the absolute possession of some single object of limitless desire, humans are seized by a feverish, unappeasable hunger and thirst that can only bring anguish instead of happiness.

Once again it is perfectly reasonable to seek sexual pleasure: that is, after all, one of the body’s natural joys. The mistake, Lucretius thought, was to confound this joy with a delusion, the frenzied craving to possess – at once to penetrate and to consume – what is in reality a dream. Of course, the absent lover is always only a mental image and in this sense akin to a dream. But Lucretius observed in passages of remarkable frankness that in the very act of sexual consummation lovers remain in the grip of confused longings that they cannot fulfill:

Even in the hour of possession the passion of the lovers fluctuates and wanders in uncertainty: they cannot decide what to enjoy first with their eyes and hands. They tightly squeeze the object of their desire and cause bodily pain, often driving their teeth into one another’s lips and crushing mouth against mouth.

The point of this passage – part of what W. B. Yeats called “the finest description of sexual intercourse ever written” – is not to urge a more decorous, tepid form of lovemaking. It is to take note of the element of unsated appetite that haunts even the fulfillment of desire. The insatiability of sexual appetite is, in Lucretius’ view, one of Venus’ cunning strategies; it helps to account for the fact that, after brief interludes, the same acts of love are performed again and again. And he understood too that these repeated acts are deeply pleasurable. But he remained troubled by the ruse, by the emotional suffering that comes in its wake, by the arousal of aggressive impulses, and, above all, by the sense that even the moment of ecstasy leaves something to be desired. In 1685, the great poet John Dryden brilliantly captured Lucretius’ remarkable vision:

…when the youthful pair more closely join,
When hands in hands they lock, and thighs in thighs they twine;
Just in the raging foam of full desire,
When both press on, both murmur, both expire,
They grip, they squeeze, their humid tongues they dart,
As each would force their way to th’others heart.
In vain; they only cruise about the coast.
For bodies cannot pierce, nor be in bodies lost,
As sure as they strive to be, when both engage
In that tumultuous momentary rage.
So tangled in the nets of love they lie,
Till man dissolves in that excess of joy. 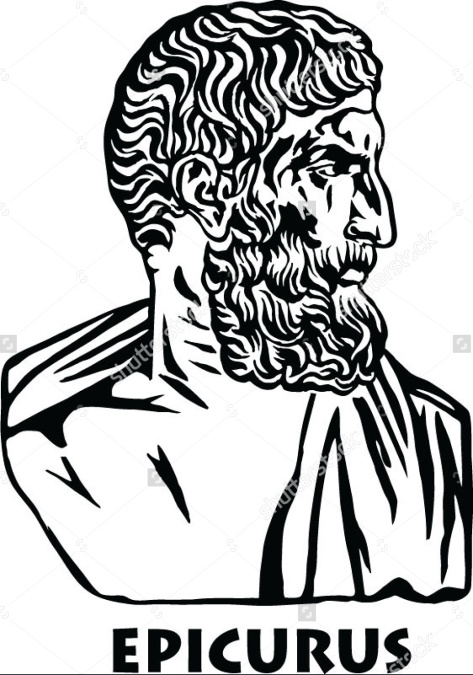 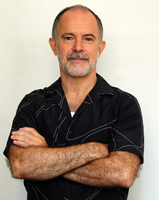