The front page of the Sunday New York Times business section yesterday led with an important story called “Selling That New-Man Feeling.” The article details how the pharmaceutical industry, especially the company that manufactures Androgel, has made literally billions of dollars exploiting adult men’s insecurities about aging, masculinity, and sexual performance. Although many scientists find the claims made by companies promoting testosterone supplements to be unpersuasive, still the market plays to guys who get suckered into thinking “low-T” is a major health problem and that boosting their testosterone levels with commercial products will lead to the fountain of youth or at least better boners. 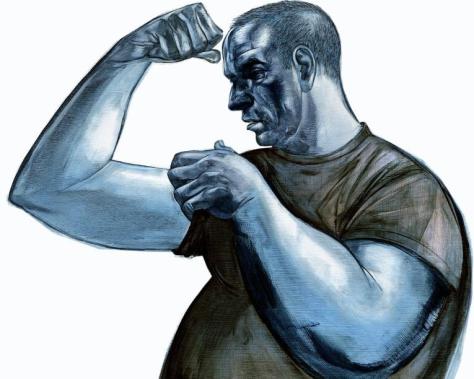 I do believe there are some men whose health is affected adversely by sub-normal testosterone levels. But that population is quite small, not big enough to enrich pharmaceutical companies. The way testosterone supplements are being marketed now, with vague questionnaires that link “low-T” to symptoms every breathing human experiences, constitutes the worst kind of snake-oil salesmanship. I have friends who’ve gotten suckered into trying testosterone patches, gels, and injections. Some of them have experienced the illusory effect of feeling stronger, peppier, and more libidinous — to my mind, indistinguishable from the placebo effect — but most of them have encountered significant side effects: irritability and short-temperedness at best, prostate cancer at worst.

Granted, any doctor who’s any good monitors prostate health closely when prescribing such supplements, but not every patient collaborates with their physicians’ best practices. But in my work as a sex therapist, I have been appalled to hear that men in their sixties and seventies have been prescribed testosterone supplements by their doctors. It seems to me unconscionable to mislead middle-aged and elderly men into thinking they can maintain the same level of sexual performance they experienced when they were 25. Men can lead active, healthy, sexually fulfilling lives well into later life, but the key factors are diet, exercise, stress reduction, and emotional balance, not to mention a concerted effort to accept aging with grace and resourcefulness — all of which require patience and commitment, for which pills and gels are no substitute.

But don’t take my opinions and observations as the last word. Judge for yourself. Read the article here and tell me what you think. Another very smart article on this subject appeared in the Times two years ago, talking about how the use of steroids and hormone supplements by athletes has spread to the general population — see Steve Kettman’s “Are We Not Man Enough?”