An excellent interviewer and a game participant-observer, Theobald creates vivid, accessible, frequently hilarious prose that makes her every bit the equal of “New Journalism” heavyweights Tom Wolfe and Hunter S. Thompson (not unlike the New York Times’ rising star Taffy Brodesser-Akner). She truly goes into this enterprise as a nervous student and extracts a bountiful supply of useful nuggets from her teachers. Curiously, given her vivacious personality, Theobald is plagued by physical inhibitions and shame about her pervy fantasies.

Susie Bright allays some of Theobald’s fears, telling her, “I have really insane fantasies. Most of them are physically impossible and morally repugnant. But they’re in my head, so it’s like criticizing me for pretending I’m a princess or riding a dragon….we need a more nuanced psychological understanding of this. I mean, I don’t actually want to be ravaged by nuns and priests on the altar, but in my imagination it can make perfect sense.” 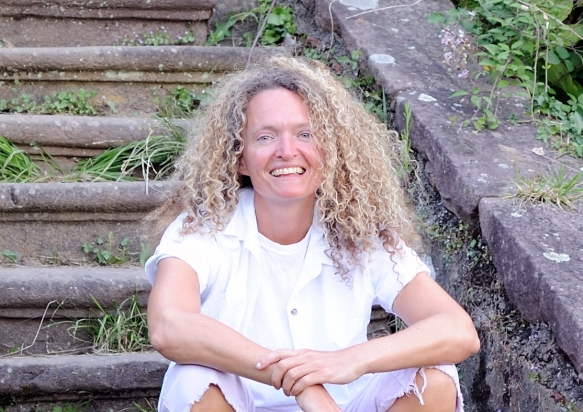 Theobald (above) gets some good instruction in edging from Barbara Carrellas and in eco-sexuality from Annie Sprinkle. The pro-dom Raven is more helpful addressing Theobald’s history of painful intercourse than the medical doctors she’d consulted.

It annoyed me when my vulvodynia doctors used to trot out the “What are your pain levels on a scale of one to ten?” line. They didn’t finesse the question by asking, “Is your pain burning, stabbing, aching, shooting, throbbing, electric?” But Raven goes even further. She says that certain types of extreme sensation — i.e., pain — can teach you to relax around fear or adversity in your life. Sometimes you just have to sit with your pain. Accept your pain — see where it takes you.

Subtitled “On the Road to a Pleasure Revolution,” Sex Drive works as a zesty memoir and a funky sex manual. Yet at heart it means to serve as a kind of manifesto, shining light on an aspect of sexuality that most women are not trained to prioritize. I’ll close this review with my favorite passage from the book, which speaks to almost anyone:

The truth is that you never know what’s going to happen in your head when you start to masturbate. It’s like that challenge in Masterchef where the chefs lift the lid on a mystery box and find they have to make dinner from a tub of gherkins, some glacé cherries, a jar of peanut butter and a couple of crayfish. Who knows what will come out in the end? The only certainty is that whatever does emerge in the privacy of your head shouldn’t be thrown in the bin. It might not win a TV show, but you should look on it as your own personal masterpiece.